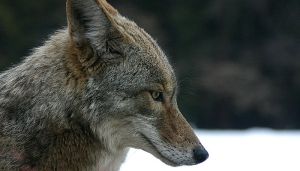 By Coyote Sheff
(Taken from: Make the Walls Transparent)
It is 3:07 a.m. as I sit here in this cold silence of another imprisoned November night, I can hear the echoes of the ghetto life ringing clearly in my head; the gunshots, the sirens, the dogs barking the helicopters. It has been years since I’ve been in the ghetto, but the memories are still with me. Living in the ghetto, to me, is like what I’d imagined it had been to be in the war in Vietnam, the sounds, the constant violence, the despair.

The cold silence is broken by the screams of a crazy Indian on the top tier and my “ghetto day dream” fades away. I tune in to the screams and the noise. There is a psych patient upstairs on the other end of the tier. He’s an Indian dude named Pacheco. He is always yelling out racial profanities like “Fuck all Niggers!” and other stupid shit like that.

Tonight he has a new mantra. I can’t make out his words though, but he keeps repeating it over and over again. It seems that he has succeeded in frustrating a couple cats up there in his area, because I can hear their angry responses. One of the cats comes to the door and tells Pacheco to shut the fuck up, so Pacheco repeats his mantra louder and then I hear another cat yell from the back of his cell, “I’m gonna smash your face in if I see ya!”

Pacheco is an old Indian with long grayish hair and I can tell by the nature of his speech that he is missing his teeth. Maybe that’s why he’s so bitter, who knows. His whole purpose, his whole intent is to make everyone around him miserable and unfortunately he does a good job at it. He’s a “terrorist”, using psychological warfare and mental torture as MO Modus operandi: In here we refer to people like that as “a piece of shit.” They like to terrorize everybody around them for no apparent reason other than the fact that misery loves company, I guess.

Pacheco was my neighbor once, five years ago on another unit back here in the hole. For no reason other than to disturb me, he’d bang on my wall and bang on the desk all day long and he’d yell over me when I was trying to talk to one of my comrades over the tier just to prevent me communicating with others. That’s something a hater would do.

I got fed up with his shit and one day I unattached the cable cord from my TV and stripped the cable cord completely so there was nothing left inside of it and I turned it into like a little hose and when Pacheco was sleeping I’d run the hose over to the front of his cell and I’d piss in the hose and I’d continue to do it all throughout the night. Every time I had to take a piss and it would create a good-sized puddle inside his cell and when he’d walk up to grab his breakfast tray, he’d step in a big puddle of piss! He would terrorize me, keep me from sleeping, keep me from socializing and communicating with others and he’d stress me out, making me angry and unable to think clearly, so this was all I had, this was all I could do to get back at him.

The cold part about it was that he had the choice of either getting down on the floor and cleaning up MY piss, or leaving it there and smelling it all day and all night, so it was a lose-lose situation for him. I pissed in his cell every night, for a whole week straight and then these guards hurried up and moved him to another unit. The officers didn’t know it was my piss, though, they thought he was pissing on his own floor. Oh well.

These aren’t the types of stories people are used to reading about prison, I’m sure. But I keep it real and tell it how it really is in here. These are the atrocities of life in a maximum-security prison. This is just a glimpse of the inhumanity, the suffering, and the torture. It’s just a small example of how we are reduced to such lows, such drastic measures just to try to keep a piece of our peace of mind. It is very sad, this solitary life of madness. How can one get out of here and expect to live a normal or at least a decent life after this? How can one go from living like an animal to living as a free person in society?

This is a sad, lonely, disgusting profane existence here in this world, behind these cold stone walls and chain link fences and people need to understand this they need to know what really goes on in these maximum security prisons, where surviving perpetual lockdown has become a way of life.

I write about these things so people can understand, because we need support from people on the outs. We need to be provided the tools that will help us adjust after being in prison, living like this, to becoming free and trying to live and maintain in society. Most of the people who are in prison already had it bad before they came to prison, they have it bad while in prison, and then they have to go out and try to make it good with strikes against them? How does that work? It was bad before, it’s bad now and it’s still going to be bad after they get out, so how is prison solving crime? How is prison helping society? We are caught in a system that was not designed to care about us; we are caught up in a system that was not designed to help us. This system has no mercy for the poor. It’s an atrocity.

So when I say that I’m greeting you from a graveyard, I think you know what I mean. We are traumatized by all of this, from the ghettos to these prisons; it’s a miserable existence. We need to come together and find ways to rise above this.