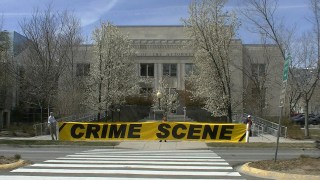 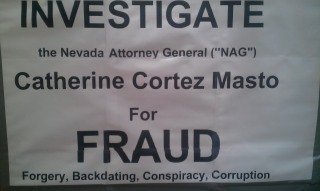 Tonja Brown:
We protested against the Attorney General’s Office for withholding evidence in cases.
The actual banner is 4′ x 130′.

Press release about the action:

I will be joining Ty Robben along with others for a protest at the Attorney General’s Office on Tuesday at noon. Due to the investigative reporting by Joe Hart and Geoff Dornan regarding the computer glitch that has caused inmates to have false felony charges placed in their files, the Advisory Commission on the Administration of Justice has called for an examination into computer glitch.

What the Advisory Commission does not know is how the Attorney General’s Office is, in part, responsible for the denials in at least one former inmate, Nolan Klein’s Parole and a Pardon, because, their office withheld exculpatory evidence from Mr. Klein and the federal court in the 2005 case of Klein v Helling. These Brady violations by the Attorney General’s Office and being compounded by the computer glitch resulted in Mr. Klein’s Paroles, a Pardon, his freedom and his fife.

I anxiously await the results from the Examination that was order by Assemblyman Horne on March 7, 2012. On April 17, 2012 I will turn over the exculpatory evidence and show the Commission the irreparable harm this has caused Mr. Klein and his family.

Read it in the Nevada Appeal (subscription is needed)…