James K. Wardell, NDOC #92924 has since summer 2010 voiced his concerns to Nevada Prison Watch, a community weblog, about the unhygienic sanitary conditions, the state of the food served, and inmates who were attacked by staff inside High Desert State Prison.
The warden has tried to silence the voice of Mr Wardell by locking him up for 10 days, naked, with the lights on 24/7, in a separate part of the prison, without his glasses or anything, in the summer of 2010.
When this torture did not help in silencing Mr Wardell, the administration gave him more days until his release after nearly 30 years, pushing his release date back to later in 2011. The warden also kept Mr Wardell on administrative segregation, and did not want him “on his yard”, yet warden Baca prevented Mr Wardell from being transferred to another prison to serve the last days of his long sentence.
When he challenged this decision in court and won (January 2011), his cell was raided and legal documents were taken.
Then, around January 22nd, he was served with “charges”, apparently old, never before served charges but served late, against the rules, without stating a reason why they were served so late (contrary to the rules), and ignoring Mr Wardell´s right to remain silent and to a not guilty plea, contrary to NDOC´s rules.
Nevada Prison Watch suspects that these actions are retaliation because Mr Wardell spoke critically on this weblog about the state of the prison and its management.
Now, Mr Wardell has to fight these false charges while preparing for release, and in uncertainty of his release date. Mr Wardell should now be working on getting housing and a job, yet NDOC has done everything in its power, including illegal actions, to prevent Mr Wardell from being released, just for speaking out against dirty showers, cold food, inmates under attack and having whole units on lockdown with no programs or anything to help prisoners better themselves.
What can you do?
Please write to the new director of Nevada Department of Corrections, Mr Greg Cox, and ask him politely yet determinedly to welcome his response or intervention into correcting these outright displays of abuse and failure of the prison officials in not following their own procedures, and the harassment of this prisoner in order to chill his First Amendment Rights at H.D.S.P.
Address to write to:
Nevada Department of Corrections
Director´s Office
Mr Greg Cox
P.O. Box 7011
Carson City, Nevada  89702
And:
Offender Management Division
Nevada Department of Corrections
P.O. Box 7011
Carson City, Nevada 89702
Also, anyone who is able to assist Mr Wardell legally with these matters can contact him at:
James Wardell #92924
HDSP
P.O. Box 650,
Iindian Springs, NV 89070
Thank you so much for your help and support!
For James Wardell,
Friends of James Wardell

James Wardell in High Desert State Prison is a regular contributor to this blog, and we at NPW would call him a supporter of social ethics, decency and humanity.
These are characteristics that are not often appreciated by those who keep people chained.

Here is another sorrowful episode of the hatred created by an overcrowded and hateful, badly managed prison:

I have been in the shower in hand-cuffs. The C.E.R.T. team (those in black uniforms) were in my cell for over an hour trying to find papers, and anything I guess to use against me.

They took my radio, one full box of my legal stuff and my head phones.

Officer Oliver of CERT told me his boss (warden Baca) told him to come tear up my house, find me something.

Then they moved me to unit 3-D-#34. They took all my pens, paper, my legal box, all kinds of stuff to mess with me, I´m sure the issue over my statutory time also rattled his cage. So now they will try to take more days from me to force me to stay longer, I´m sure.

The investigator was here at 5:30 AM to look at what I wrote about the dirty showers (black mold). Maybe they messed with me because of that visit of the Inspector?

Under perjury of NRS 208.165 I hereby declare my statement is true and correct. And that I´m still being retaliated against by warden Baca over being vocal of prison conditions.
Dated this 6th day of January 2011, signed: James Wardell.

It seems like those trying to manage the High Desert State Prison in Indian Springs are getting their way in turning it into another locked down prison. They use racial tensions and riots as an excuse to do what they always wanted to do, and turn it into a permanently locked down prison. They never wanted to change anything for the better for those locked up with no incentives, no programs, no reform, nothing to look forward to, mere eternal boredness. Those in charge, paid for by us all, never did want to correct these men. They did not want to reform these men. They did not call upon their bosses to make it possible that men never return to prison. And if they did, we did not hear it. We received the following to illustrate this:

As a former NDOC caseworker at HDSP and ESP, I can tell you there has been a plan for many years to make part of HDSP a maximum security prison (along with a Condemned Men’s Unit and new Death Chamber). Much of the plan precedes the current NDOC Director Howard Skolnik. I was in a meeting several years ago at HDSP when Glen Whorton discussed this idea. The plans are now part of the public record although Director Skolnik would deny that these plans are still in play.

If Ely State Prison becomes privatized (a possibility with Governor Sandoval elected), the plans to make HDSP the max could still be implemented as a cost savings measure.

The latest “uprisings” give NDOC officials the rationalization to increase security levels in preparation for the transition to maximum security. Remember that Warden Neven was the Associate Warden of Operations before taking the warden’s position at HDSP so he will use many of the same techniques used at Ely.

This comment sent to NPW by Mr Shaulis is illustrated by the following update written on 19 November 2010, by Mr James Wardell who is incarcerated in High Desert State Prison:

“They have now instituted a Level 4 Status Per Memo from warden Dwight Neven.

That quad was closed down last year due to staff shortage. But it has been reopened now because of all the racial tensions.

Warden Neven is trying to turn H.D.S.P. into another Ely, at least that´s what all the guards are saying.”

Like Loading...
Received Nov 19th, 2010:
It is clear that Warden O. Baca at the High Desert State Prison, located in Indian Springs, Nevada, has focused his attention on Prisoner James Wardell #92924 for exercising his First Amendment rights for filing a Prison grievance and to pursue Civil Rights litigation in the courts for Retaliation by his appointed official.
Inmate Wardell filed a grievance on Warden Baca for pulling him out of cell 3-B-#15 and putting him in cell # 1 at (OPS)  naked for 10 days in an isolation cell in unit #14 called the Operations Building.
This was done because Inmate Wardell exposed one of Warden Baca´s well-known informants, or because Inmate Wardell has been vocal over the abuses the H.D.S.P. is well-known for, such as poor living conditions, cold food no matter when it´s served, the facility´s refusal to follow its own AR´s and Procedures that were inacted, yet the staff refuse to follow, ad they do as they wish.  With full knowledge they´re not going to be instructed to do otherwise! Inmate Wardell is now being refused release from Ad. Seg., all because Warden Baca told his Caseworker: Quote:
I don´t like Wardell, “So transfer Wardell off my yard right now.”
But O.M.D. (Offender Management Division) said no to the transfer, and Warden Baca still refuses to release Inmate Wardell back into General Population.
This Inmate has no enemies or sepertees listed on H.D.S.P., has been on this prison yard for over 20 months now, and has not been involved in any recorded violent issues.
But it´s clear that Warden Baca´s retaliation methods are because Mr Wardell is exercising his Constitutional Rights, and because Mr Wardell is vocal on Prison Reform and argues for changes to help the Prisoners, as some are clearly in fear of retaliation over such  that he is faced with now. In which Warden Baca´s actions can only be construed to chill Mr Wardell´s First Amendment Rights.
Because there is no legitimate penological purpose for not returning Prisoner Wardell back to G.P. except for Warden Baca´s dislike of said prisoner, if this is not a clear view of retaliation by a Prison Administrator, we would hate to venture to see what is.
So this is the Nevada Department of Corrections Policy of how they deal with men who try to exercise their Constitutional Rights, or voice their views and opinions over mistreatment and abuses?
Affidavit
State of Nevada
County of Clark
Sworn Affidavit per NRS 208.165
I James K. Wardell, do hereby swear under the Penalty of Perjury that I have made the above statement, and can back up these facts with Documentation to the truth.
Dated this 11th Day of November 2010
Signed: James K. Wardell #92924
Note:
Inmate Wardell has had e-mail (Jpay) withheld for up to 10 days (The Vera Institute of Justice Accountability Report on the NDOC).
Personal mail received but no contents in the envelopes, property confiscated and refused to mail out his property. And now that he is 149 days from discharging they refuse to release him from Ad.Seg. back to G.P.!
You can judge a nation by how it treats its prisoners. What grade do we give the State of Nevada? 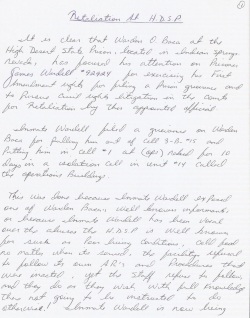 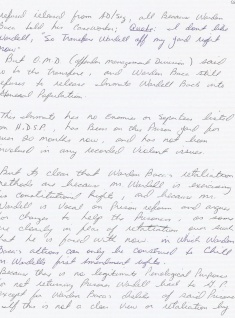 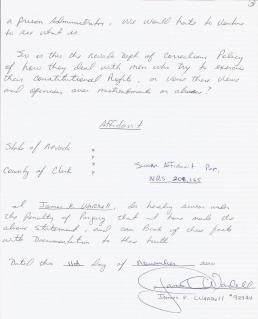 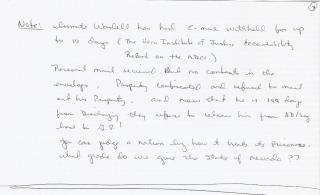 Mr Wardell requests to have this published here. In support of his grievance, we do so. We hope that his rights will be acknowledged and that retaliation will no longer be tolerated at all inside the prisons in Nevada.

Check out the JusticeForNolanKlein.com website  Look at the Wrongful Death suit.  This suit has brought to light the retaliation of inmates by administrators who voice their concerns and their Constitutional Rights.

Changes will be made for the inmates through Nolan Klein’s death.